Learn more about the project in our Online Open House, including the siting process to gather input from the public. Click on a map below to open a larger PDF version.

On Sept. 12, 2017, the Arizona Corporation Commission (ACC) granted approval of a Certificate of Environmental Compatibility (CEC) for the Price Road Corridor (PRC) project. The approval, by unanimous vote, is the final step of the application process and enables SRP to move forward with project construction.

Route approved by the ACC: 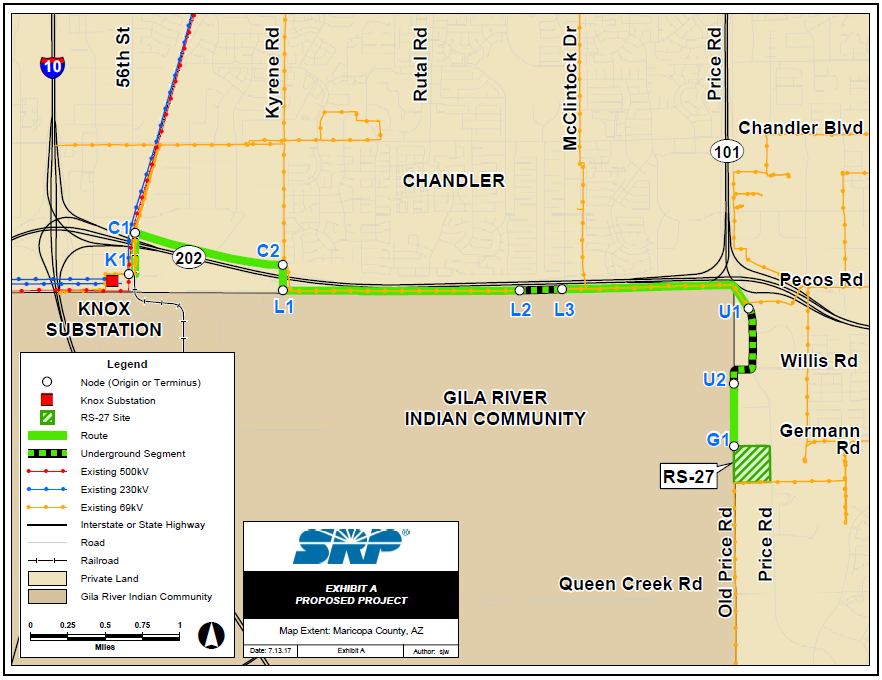 On June 13, 2017, SRP filed an application for a CEC with the ACC for 4.8 miles of new overhead transmission line from the Knox substation to a new RS-27 substation, generally along the south side of the Loop 202 and then adjacent to the Gila River Indian Community boundary north of the substation site. The remainder of the project is planned to be underground.

The two maps below were used at our second open house. These maps show a proposed route alternative for the final segment of the new transmission line. This alternative resulted from the agreement between SRP and the City of Chandler. The map on the left displays the entire project path from the Knox substation, along the Loop 202, to the north-west portion of the Price Road Corridor. The map at right displays just the northern portion of the corridor. The routes reflected in these maps were included in the CEC application. 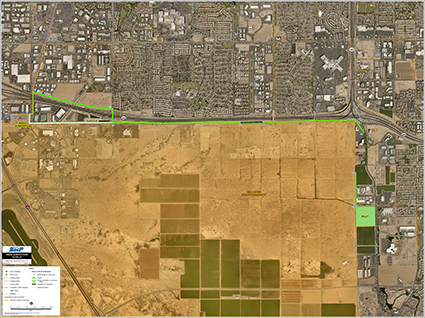 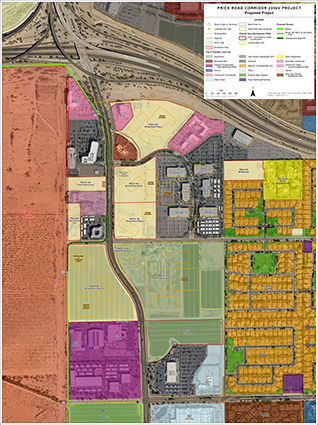 The map below shows the northern portion of the corridor and was used by the public in our first open house meeting to suggest route alternatives to connect the line from the intersection of Price Road and the Loop 202, as it enters the Price Road Corridor, to the site of the new RS-27 substation. 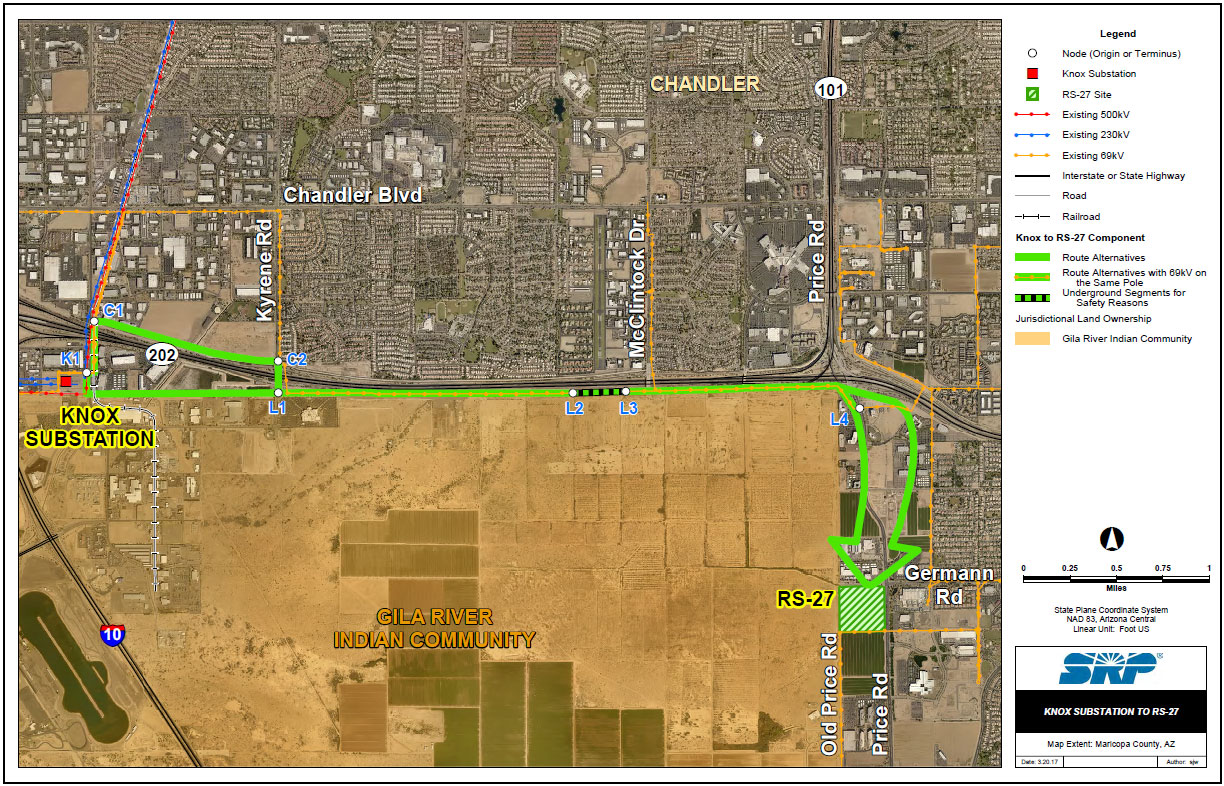 The map below illustrates the status of the public siting process on private lands in late 2013. At that point, SRP concentrated most of its efforts towards pursuing the route alternative on the Gila River Indian Community land (GRIC). We indicated to the public at that time that if SRP was not successful in obtaining the route on the GRIC, we would continue pursuing these alternatives. Now, based on the City of Chandler's August 2016 General Plan and SRP's reduced load forecast, we have removed the Chandler Boulevard alternative as well all single and double circuit 230 kV route alternatives south and east of the RS-27 substation site. 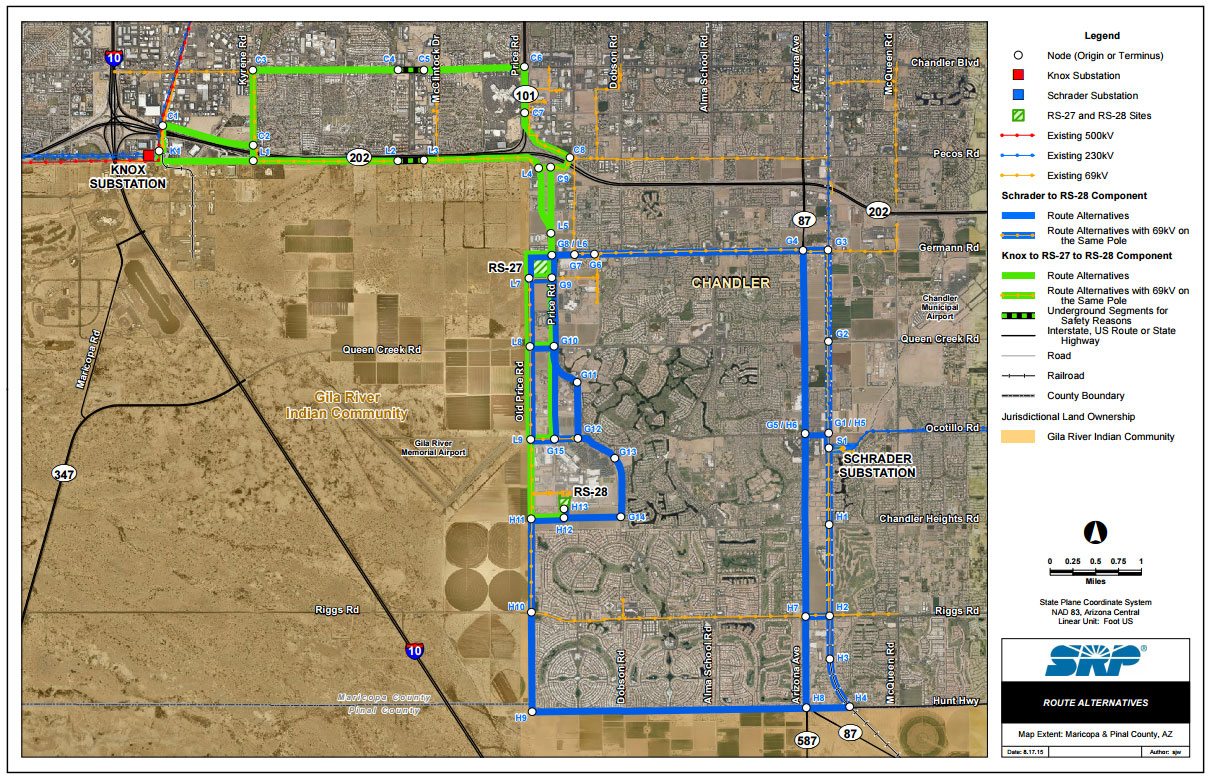